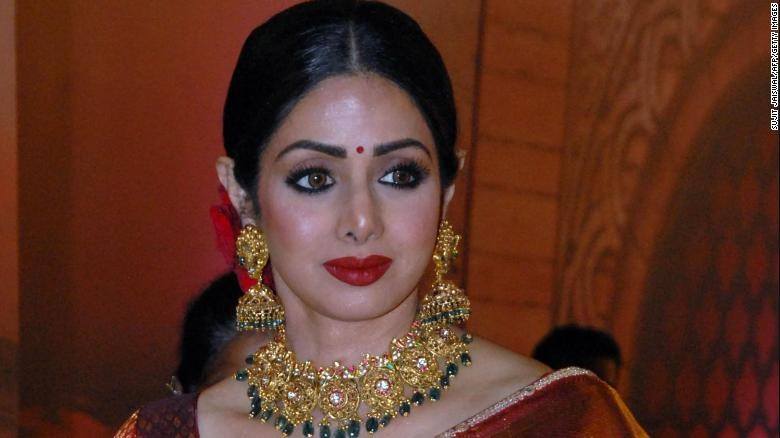 The Indian film-world is absolutely shocked by the sudden death of the superb Bollywood actress, 54-year-old SRIDEVI,after a heart-attack, yesterday !
Everyone,from the Indian PM to the London Mayor, has expressed their condolences.
She could well be described as the first female superstar of Indian Cinema, having made it to the top in Bollywood, after acting in regional-language films from all around the country- Tamil,Telugu,Kannada,Malayalam.

I’ve lost track of her many memorable films- ‘Sadma, Mr India,Chandni, Lamhe ,
Judaai—‘ so many others.
She lived on her own terms, in her private life too, falling in love with a married Mumbai producer,and having two daughters .

The actress came out of domesticity, to act in another marvellous film ‘English Vinglish’ in 2012. She was all set to start another interesting movie, this year.

An iconic,inspirational artiste, her death is a huge loss to Indian Cinema, and to all lovers of Indian films.

Look at the most recent Pics of the gorgeous actress-

The First pic, was taken at the Zee Cine Awards,in Mumbai, only 2 months back,in Dec 2017.

The Second pic was taken at the Opening of the International Film Festival of India,in Goa, only 3 months back,in Nov 2017, which she attended with her husband and elder daughter,an aspiring actress.

The Third Pic, was taken at the family-wedding she attended in Dubai, just the day before she died, with her husband and daughter-!