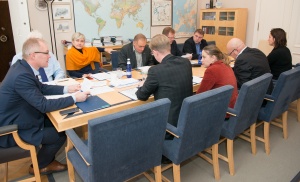 Today, the National Defence Committee heard a report on the work of the military and security and defence policy terminological committee of the Ministry of Defence. It came to a joint conclusion that the military terminology must be unambiguous.

Member of the Committee Ants Laaneots spoke about how the Russian military terminology was used in the beginning of the 1990s; after Estonia joined the NATO, terminology started to be translated from English, and efforts were made to harmonise it. “Military terminology must be unambiguous so that it would be understood in the same manner by everyone who is active in the military field, or takes part in the national defence and finds themselves in a situation requiring military activity. Today, even the experienced military do not always understand a term,” Laaneots said. He stressed that although it was important to know the English terminology – as Estonia is a NATO member state – it should not be adopted automatically by the Defence Forces.

“Certain fields are undergoing a rapid development both in the technological and linguistic sense,” Hanso said. “This is why we must understand that our language cannot stop in its development.”

The Committee heard that the Estonian Defence Forces communicated in Estonian, and yet as a NATO ally, the official language also occasionally uses English terminology and abbreviations. The terminology is accessible in the Militerm data base managed by the Institute of the Estonian Language. The data base currently includes nearly 4,000 terms.